Primavera Sound Festival returns to Barcelona this year with one of the most diverse line ups of the summer.

After rocketing into the consciousness of the burgeoning European festival scene at the turn of the century, hosting the likes of The Pixies and Aphex Twin in the early editions – a sure fire way to start cementing yourself as one of the continents hottest – Primavera Sound Barcelona does it again. The festival bounces towards the 2016 edition with the usual bundle of independent music, the artistic world, and some big dogs of the music world for good measure.

Topping the list of names at this year’s festival will be Thom Yorke’s Radiohead who, after a few years away concentrating on various side projects and solo records, will come together once again for one of their first shows this year. Another band making a comeback at the festival will be LCD Soundsystem who are also set to release their fourth studio album later in the year. Other notable names at the top end of the line up include Iceland’s Sigur Ros, PJ Harvey and Tame Impala on the back of their latest album ‘Currents’.

With an array of acts this year, Primavera Sound has a firm grip on the mantle as one of Europe’s ‘must-go’ festivals. A perfect fusion of guitar driven bands, electronic, dance and experimental artists, one look at the poster for 2016 and it is easily one of the tastiest line ups of the season.

Taking place primarily at Parc del Forum from Wednesday 1st June to Saturday 4th June, with various other parties and gigs dotted around the city and the Raval neighbourhood. We will be doing the honours in the coming months of digging through the events of the festival to spot out the movers, shakers, and happenings to help your planning and prep!

For highlights of the festival and a 360 preview of the Parc del Forum site head over to the Primavera Sound page for more information. 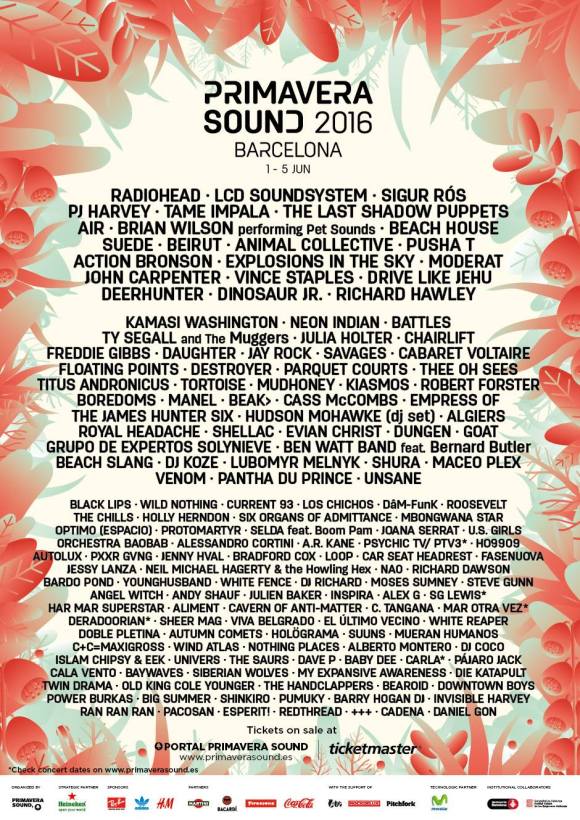