Approaching the debut weekend of Sunfall festival, we take a look at some of what the weekend has to offer through both day and night.

Hailing as a new festival for London, we see a spectrum of acts throughout saturday afternoon. The Yussef Kamaal Trio, Mister Saturday Night, Hunee and Moodyman are just a few acts to look forward to. A day that divides into a multitude of evenings, refining and cultivating a festival agenda with the sprawling logistics of Londons event culture; Sunfall showcases a broad musical fabric of the city of London and its worldwide influences. Check out the full line up below and just a few of our picks…

There are very limited tickets left – grabs them while you can here. 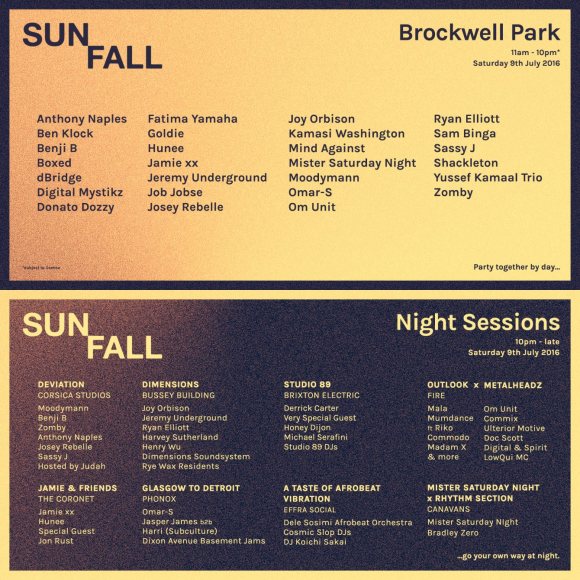 Starting off the day we are greeted by The Yussef Kamaal Trio, an all encompassing Jazz band technically comparable to the rest of the days music. Maybe for most they are not the go to act of the day, but those that catch them unknowingly will find a pleasant surprise; setting the scene for a sunny afternoon. Often featuring with an extended band or collaboration, The Yussef Kamaal Trio have a broad spectrum of talents and have previously worked with Henry Wu, another act not to be missed on the weekend. Check below for a taster from a recent performance at Jazz-Refreshed.

Henry Wu has brought a soft form of soul out of London, riding over some delicately shuffled grooves and g-funk reminiscent hooks and a fresh perspective when performed with The Yussef Kamaal Trio, he appears later at Bussey Building x The CLF Art Cafe; a night concluding with Joy – O. Listen below to the shades of Henry Wu.

For us, the gem of the day. Good vibes comparable to the sun, Justin Carter and Eamon Harkin come from New York to bring us the ever eclectic party set to compliment and conclude the days events. A regular visitor of London, they play in the afternoon and then again later at Canavans.

Sunfall doesn’t just provide a dynamic range of acts, but truly taps into the inner city event spaces that London has to offer. Not only offering music for the day, the knowledge arena runs throughout the afternoon, inspiring musicians around to create and propel the scenes an event, as well as a record fair that you can pick up some finds from. Enjoy!