For the second year Gillett Square came to life for Dalston Music Festival, hosting an eclectic mix of genres across 9 venues. We ventured down Kingsland road to check out what this year had to offer and it didn’t disappoint…

The day started at 1pm with the music kicking off on the main stage in Gillett Square, set to a backdrop of food carts aplenty, a BBQ and a few spots to grab a cold beer on a warm summer’s day. There was a real community feel to the festival, with all ages and people coming together to experience some of Hackney’s finest rising stars amongst the concrete jungle.

As the day moved into the evening the crowd began to split off and head towards their chosen locations. With 9 venues to pick from there was something for everyone, and stages were close enough together to venue hop between favourite bands or DJs in quick succession.

The main highlights of the festival included Zombie Zombie bringing their electro pop performance to Pond, whilst Super Best Friends Club had everyone dancing to their intense fusion music at Arcola Bar. Grand Union Orchestra put on two impressive performances across the day, bringing together some of the best musicians from all over the world to create unique live shows, and a special shout out to the guy who ate an entire birthday cake with a bank card – you know who you are. 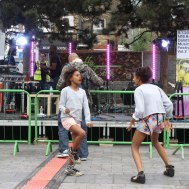 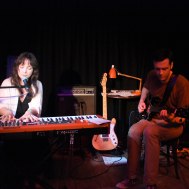 It’s fair to say Dalston Music Festival is still in its infancy with a focus on the homegrown and community, however it holds a promising future. Building on the good times of this year and making the right bookings moving forward, it’ll soon become a staple for the London festival calendar.

Keep tabs on the Dalston Music Festival Facebook page for next years party!

1 reply on “Dalston Music Festival: The Community Party With It All”

Beautifully written it made me want to be there …