This month we caught up with Karl and Eniz from Feelings ahead of the launch of their new label Feelings Worldwide. The Menendez Brothers have been throwing parties across the capital for a number of years now, drawing inspiration from past dance music scenes and cultures. Their goal is to bring together some classic names with new DJs and producers to throw intimate and original parties.

Thanks for talking to us guys. Firstly, how did you start out in organising parties?

A few years ago now myself and my good friend Eniz were working on a bunch of other parties and large scale outdoor events at Found Series amongst others and we just wanted to start something low key for us and our good friends to play the records we wouldn’t normally get to play at the parties we were part of or going to at that time. We took over a basement in Dalston invited our close friends with big record collections and it went from there!

Stories and old mixes from a lot of the pre-1990 clubs Hacienda, Paradise Garage, Amnesia, Muzic Box, The Warehouse etc and their no holds barred approach to Djing, weaving between disco, funk, soul, hip hop, early house, electro or whatever else really excited us and inspired the idea of what we hoped to recreate at our party.

“The sounds and stories of these eras and people… certainly inspire us in a romantic sense.”

The roots of dance music play a part in the nights you put on. How important do you think it is to keep the culture of these scenes alive?

As much as we think it is important to look forward, having a true understanding of the history of any culture you’re invested in is super important. Without knowing the history of a culture I think it’s hard to really understand it’s relevance. It’s important that people are reminded of a time before business, money and egos got involved to recognise a culture they love now in it’s original, purist form.

From Balearic to the more obscure scenes, where does the inspiration for the next night come from?

To be totally honest, we’re all pretty big nerds when it comes to music and it’s history which is what gives us the above opinion. It tends to be us reading up on those original parties or scenes as a hobby, which then gets us really excited and want to bring back one of these greats who maybe hasn’t played in a while, to try and get a first hand experience of a story we’ve read or saw that’s been romanticised to us. Nearly every time it delivers!

Who are some of the most important DJs and scenes that have inspired you?

It’s a funny one as a lot of the DJs and scenes that inspire us we may not have experienced first hand, like the things we mentioned above, from disco through to post punk and new wave, from proto-house to acid house & techno. We obviously didn’t experience these things first hand but the sounds and stories of these eras and people like Frankie, Levan, Ron Hardy, the Detroit guys, even Weatherall and Rampling certainly inspire us in a romantic sense.

Outside of that our early experiences of clubbing in London at places like The End, Plastic People and of course Fabric hearing house, dnb, techno, electro, grime & even ‘nu-rave’ (lol) gave us a very wide and varied respect for different sounds which has definitely shaped the way we think a party should be now.

Two years into Feelings you’ve just launched your label with the debut release from Iranian producer Kasra V. What was the thought process behind developing the night into a label?

It wasn’t hugely planned to be honest, with our residents and regulars making music and then through speaking to a lot of the guests – old and new – we have been booking, the opportunity has presented itself so we’re just going with it.

“A lot of people who come to the parties definitely know the acts, but for the ones that don’t, I would say we’re doing a pretty good job so far”

You’ve thrown parties in a whole host of venues, from Churches to Strip clubs, what have been some of your favorite spots? what’s the process like in terms of scouting them out?

Well the two you mention were both amazing, although ethically both sort of strange places to have a party. Each of them really leant themselves to the guests we had playing at that specific party. So that’s certainly something we look to do, make sure the aesthetic of the surroundings compliment the sounds.

That being said, using spaces like that – although exciting – come with their own set of problems and I would definitely say some of the purpose built spaces we have used like Corsica, Oval Space etc are without a doubt on par!

One of your main goals is to educate the younger generation on the roots and history of dance music culture, how successful has that been for you so far, what has been the response from the newer generation to some of the more tenured DJ’s you’ve booked?

A lot of the people who come to the parties definitely know the acts etc but for the ones that don’t, I would say we’re doing a pretty good job so far… 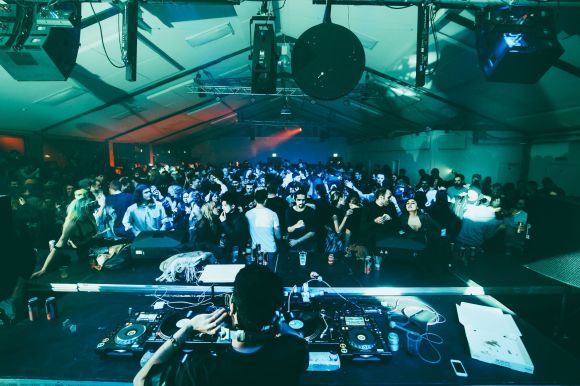 From Balearic beat with Alfredo, electro with Egyptian Lover, disco with Nicky Siano and a bunch more, a lot of our friends and people who have come to the parties weren’t directly aware of the sounds being presented to them and we definitely opened ears to some sounds outside of the usual ‘DOOF DOOF’ they’re used to.

In growing the reach of your nights to venues in Liverpool and Leeds, are these cities important in your mind in terms of their dance music scenes?

Both Leeds and Liverpool have been been super important to dance music culture in the UK as far back as the acid house explosion and events before if we’re talking dance music pre-house. We have good ties with those places via friends/uni etc and we’re excited by the parties we see going on there at the moment. With us launching the label we thought the time was right to come and see how we stand up in new territory.

What are the plans for Feelings Worldwide in 2017?

We have a lot of ideas for next year… with the label, obviously more releases, some from our inner circle and potentially some with guests who have become friends of ours since inviting them to our parties over the years. Outside the label we’re looking to throw a lot more parties in London and hopefully hit some new places we’re yet to experience! A few other tricks up our sleeves that we’ll keep quiet on for now… other than that, a whole lot of dancing x