Mammal Hands have been making waves on the circuit ever since their first album release – Animalia – in 2014. Since then the jazz trio has supported some of the biggest names performing across the UK at the moment, while also releasing a critically acclaimed second album, ‘Floa’.

We were able to catch up with the Mammal Hands guys ahead of their performance at the Ealing Jazz Festival to find out the ins and outs!

Hey guys! Firstly, Tell us about how Mammal Hands came about and what your roles are in the trio.

Jordan: Hi there, so we’re Mammal Hands, which is me, my brother Nick Smart, and Jesse Barrett. We all currently live in Norwich and that’s also where we met while busking about five years ago. I mainly play saxophones and flute, but am interested in a lot of other areas of music and instruments.

Jesse: I’m a drummer and tabla player, I’ve been a disciple of the tabla maestro Sirishkumar Manji for the past eleven years and that has influenced my drumming a lot.

Nick: My main instrument for the last few years has been the piano, but I’m interested in the production side of things too, I did a music tech course at uni a few years back which definitely helped with all that.

You have been a feature of the burgeoning scene bringing jazz-infused sounds to a modern audience. How did your sound develop, and who are your influences that feed into this?

Jordan: Our sound developed by playing together a lot and being open minded to trying things out. It’s fun composing as a trio because everyone brings their own thing to the table, but it’s a small enough group that a lot of ideas can be explored.

Jesse: Yeah our sound has developed out of wanting to explore what is possible within our set up also and trying to generate as much live energy as possible.

How would you typically approach writing your music?

Jesse: We don’t really have one set approach, some tunes are from jams and they built up out of that or joined onto other short pieces we have explored, some of them are developed out of an idea one of us has brought in.

Nick: It’s a pretty intuitive process when we write, we don’t have a formula for writing tracks we fall back on. We normally try and settle on an idea that has the potential to develop in lots of ways or something that can transform slowly over time so we can try and tell a story with the track. 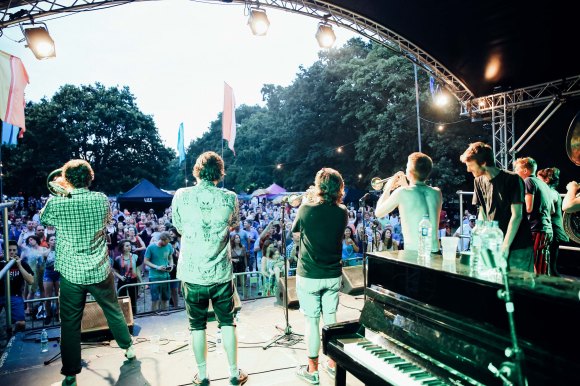 Ahead of your performance at Ealing Jazz Festival this weekend – is there anybody that you’re looking forward to catching?

Jordan: We’ve been really busy over this summer so far so it’s sometimes tricky to catch stuff but if we get time I’d definitely love to see Ebo Taylor, and also am a big fan of Nubiyan Twist, who we’ve done a few shows with before.

– Thanks to Mammal Hands for taking the time to chat.

(Unfortunately, Ebo Taylor & Saltpont City Band have had to withdraw from the festival due to Visa difficulties coming into the country – show your support!)