As Primavera approaches it’s time to get your plan of action in order. Whilst it might be easier to follow the plethora of huge names around the festival, the magic is often found amongst the smaller, lesser known artists that bloom in darker corners of Parc del Fòrum. So we’ve put together a list of must see smaller gems to make sure you’re well versed in the full musical scope of this year’s line up.

If you want a festival experience that strays down a different path than the main acts, the Art Ensemble of Chicago is the one to watch. The group is an avant-garde jazz ensemble that came together in Chicago in the 1960s. This year marks their 50th anniversary, and, while they’re not exactly small in terms of their influence and innovation within the jazz community, they’re almost certainly lesser known amongst the wider, contemporary music scene.

Instruments range from the expected (saxophones, drums, trumpets) to what the ensemble deem ‘little instruments’ like bicycle horns, bells, birthday party noisemakers and wind chimes. The ensemble incorporates costumes, face paints and a musical range that spans the entirety of the history of Jazz, for an iconic audio-visual submersion that should not be missed. Art Ensemble of Chicago take to the Auditori RockDelux stage at 19:00 on Thursday.

Rex Orange County is a baby of the music industry whose songs sounds like the sweet sepia of teenage love, sung in the honeyed and summery tones of R&B pop. He wears his heart on his musical sleeve, documenting the trials and tribulations of navigating new relationships. It’s tough love, young love and lovely.

Over the past year or so music bloggers, journalists and musicians alike have had Rex pinned as one to watch. Fans include Tyler the Creator and Frank Ocean. In fact, Tyler the Creator was so into Rex Orange County that he flew the Surrey musician out to LA to work on two of his tracks, Forward and Boredom, both of which became stand outs on Tyler’s album most recent album Flower Boy. To catch a glimpse of Rex Orange County head to the Pitchfork stage on Saturday at 19:15.

Liminal Soundbath is the new project of the Sigur Rós frontman Jónsi, Alex Somers and Paul Corley, which explores the soundscapes of Sigur Rós in a way that treats the music as an ever-proliferating eco-system of creativity. The project incorporates choreographers, visual artists, new technologies and scores to create a ‘never-finished project of ceaseless invention’. The sound is hypnotic, ambient, delicate and alien in the way that only nature can be. As the collective blur the boundaries between works done and works in progress it creates an exploration without time, an eternal, self-contained pocket in musical space. Liminal Soundbath performs on Friday at 19:30 in the Warehouse, it’s guaranteed to be magical so get yourself there. 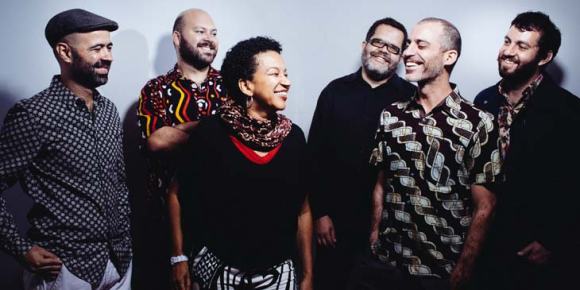 Metá Metá is a musical trio that heralds from Sao Paolo, Brazil. The trio blends furious jazz percussion and saxophone, punk, samba, and cacophonies of polyrhythmic spoken vocals to create unique, seductive beating corridors of sound that incorporate sonic elements rooted in the Afro-Brazilian religion Candomblé, a religion that links back to west Africa and the slavery days.

Over the past few years Metá Metá have established themselves at the forefront of an innovative and collaborative music scene in the city of Sao Paolo, working with giants such as Tony Allen, the legendary Afrobeat drummer described by Brian Eno as ‘the best drummer who has ever lived’. The trio perform on Friday at 19:30 on the Primavera with Apple Music Stage.